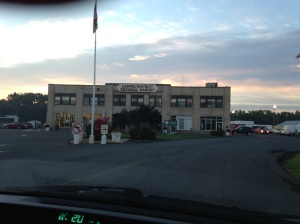 Our friend Gail suggested we go to the local Farmer’s Market to get the freshest food. Not a retail market, like the ones in Albany or Troy or Schenectady or Saratoga, but the co-op owned by the farmers themselves, the one in Menands.

Story is, back in the old days there was a big open air market run by the City of Albany, somewhere near where the Times Union Center is now.  It was crowded, expensive, and access was poor.   So the farmers

The Farmer’s Market at Dawn. We got here late, the farmers had been here for almost two hours.

took it on themselves to go way north to Menands and buy some land, where they built an administration building and some stands.  In the 1930s they opened the Cooperative Farmer’s Market, where they go Monday, Wednesday, and Friday

So we got up early (for us, about 5:30).  Of course, the farmers had already been onsite for an hour.  We got there late and had to play catch-up.

It’s exciting to get up earlier than you are used to.  We’d talked about the market the night before, but figured we would need the sleep.  However, we were awake enough to move, so we dared each other to be in the car in 15 minutes.  We made it in 20.

Many of the good things were already taken.  And since this was our first visit, we’d already done some of the shopping from our usual suppliers (you wouldn’t believe how many places we buy from).

Our Haul This Week!

So here we go.  The peaches are farm fresh from Stone Ridge, NY, a scant hour away.  The Yukon Gold potatoes are fresh, but not so local:  they come from a grower’s cooperative in Pennsylvania.  And the onions likewise:  they are from  Washington State.  Still, a bit fresher than if we’d bought them from the supermarket.

Will we go again?  Sure!  It was fun and we met some nice people.  And as Gail told us, the more you go the better you get to know them.  The more you understand who grows what, who has the very best, and where you want to shop.

Next time we’ll get there at 5, when the best deals can be found.  And order ahead:  some people only bring what they already have sold.

This site uses Akismet to reduce spam. Learn how your comment data is processed.