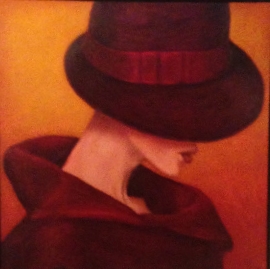 Chef Ross is whipping up a special menu, we’ll pass out Tapas hors d’oeuvres and Sangria, and we’ll be serving dinner till 9!

Gary Masline is a painter who works exclusively with oils on canvas. A resident since 1979 of the Capital District, his paintings have been included in juried exhibitions across New York State, receiving awards at the Mohawk-Hudson Regional Exhibition, the Arts Center of the Capital Region’s “Fence Select Exhibition”, and from Albany Center Gallery. In 2010, the Albany Institute of History and Art, America’s oldest art museum, named Gary one of “Tomorrow’s Masters Today”, and in 2001 he won the readers’ poll for “Best Visual Artist” in “Metroland”, the Capital Region’s weekly arts and entertainment newspaper.

Gary paints with the understanding that art is meant to provoke a response, and his hope is to stimulate a dialogue with viewers responding to his use of color, light, and even body language, to establish image, illusion, or icon. The vibrant palette and intense light of the American Southwest have affected his work, and Gary believes the Southwest is one of the earth’s centers of spiritual energy, which animates artistic awareness. Realizing that a painting can feign a reality which the viewer may never have experienced or seen, Gary asserts that people can nonetheless be profoundly affected by southwestern images serving as emblems or totems, with the symbols or gestures in paintings generating highly individual “stories.”

Gary Masline’s previous creative incarnation was as a screenwriter, and he reasons that painting is a consistent development stemming from that history. If one thinks of Gary’s paintings as consisting of line/drawing, pigment/color, and story/narrative, his work reveals him still “making films”…now just one frame at a time.

Gary currently is a member of the board of directors of the Upstate Artists Guild, and formerly served on the board of Troy’s Fulton Street Gallery. His studio is in Troy. Trained as a lawyer, Gary in 2010 retired from a longtime position as assistant counsel and press spokesman for a governor’s investigatory commission. He lives in East Greenbush with his wife Sharon.