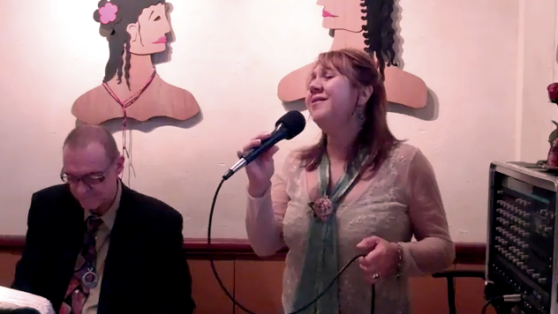 Sonny Daye and Perley Rousseau achieve a rare musical symbiosis. The husband and wife team have spent the last several years developing and perfecting their unique blend of Jazz, Brazilian Bossa Nove, and International Cabaret which has become their musical signature. An eclectic repertoire including Great American Songbook standards, French love songs and irresistible Bossa Nova sounds of Jobim is part of the reason for their impressive performance schedule, an average of 250 dates per year throughout New York, New England and in Europe. The true test, however, is in live performance where “they deliver the goods”. (7 Days Magazine)

Perley was raised on the jazz greats from day one (Ella was the first recorded voice she remembers hearing), and as a young girl she was captivated by the Bossa Nova sounds of Sergio Mendez and Brazil 66. At the age of 22, while living in Chicago, she entered a talent contest on a dare from a friend. Singing a capella “My Funny Valentine” and “Lady is a Tramp”, she won first place, which gave her the impetus to study jazz vocals. While studying in Chicago and sitting in as guest vocalist in many jazz clubs she landed her first “real paying gig” and began persuing a dream that had been brewing since childhood. Desiring pure tone and a firm foundation, she continued her study of voice in New York with 4 years of private study in classical technique with international opera diva Sylvia Kutchukian, which Perley in turn teaches to her own vocal students. Having a “beautifully rich voice, with the emotional power, swing and improvisational feel of a true jazz singer” (The Jazz Observer) brings a distinction to her captivating effervescence and saucy stage presence in cabaret performance. Yet it is her genuine warmth and love of the music graced by her “inimitable style” (Paul Elisha, WAMC radio) which draws listeners into her unpretentious and heartfelt interpretation of Great American Standards, BrazilianBossa Nova, and French songs, many sung in the original language.

Sonny’s musical training began with the drums which he began playing at 7 years old. His inspiration came from his father, his aunt Marion and his godfather who made sure he had a heavy dose of listening to the jazz greats. Aunt Marion, a nun at the time, took it straight to the top when she sat in on drums with the Lionel Hampton Orchestra in full habit! His love of rhythm and improvisation were firmly established as he immersed himself in jazz and began playing in bands in his teens. He later went on to study music at North Texas University where his foundation for piano work began. Some touring and free lance work ensued in his 20’s and early 30’s including a tour with the Ted Weems Orchestra. Sonny met Perley when he returned to upstate NY and worked as a substitute drummer in her trio. It was love at first sound. The two were soon married and began a lifelong musical collaboration.Their performances are often sprinkled with a spontaneous banter that only a 25 year marriage can enliven. Perhaps that is why Chronicle Magazine declares them “harbingers of aesthetic jazz…[and] romanticism”.

Sonny & Perley keep a busy performance schedule, touring with their trio, quartet, or quintet, performing for concerts, festivals, cabaret shows and private events.. Three CD releases, “Love Dance” 1996, “East of the Sun” 1999, and “Let It Happen” 2004, and “Love Is Here To Stay ~ LIVE!” 2009 have generated international air play and received critical acclaim. In 2005 they were invited to participate in a collaborative effort of original compositions involving 13 other outstanding artists of the Capital District of NY which resulted in “Saratoga Pie”, a CD produced by the Grammy winner Joel Moss, producer of Tony Bennett, Rod Stewart, Bill Charlap and many other notables.

Dinner Specials for Friday, May 11:

Ceviche of Shrimp, Scallops & Tilapia
Served On a Halved Avocado Over Mixed Greens